One of the principle techniques of video editing is called “match on action”.A match on action occurs when the editor chooses to cut during the middle of some action to another angle of the action as it resolves.

Here is a fine example of one such "match cut." The technique is used because it disguises the cut. The edit point is natural and invisible because the viewer anticipates the action. For this reason, the amount of action in a scene typically determines the amount of cuts an editor can justify. Unless he or she is working with footage from a multi-cam shoot, an editor must make a jump in the timecode to create a match cut. An editor will have to cut together two shots that were recorded at different times, which are typically different takes from the same scene. This is helpful to the editor, as it allows the option to choose takes based on performance and mix several takes into the same scene instead of being stuck with showing things exactly as they first happened. However, the action of two different takes is usually imperfect and the issue of discontinuity can begin to creep in.

Whether continuity is broken because of a small change in the setting or a prop, or in the timing of an action in the background, one thing is for sure: breaking continuity is the quickest way for the editor to reveal himself to the audience and disturb the flow of the edit. This is an excuse for the viewer to lose engagement and be pulled out of the story.

Nailing the match cut is how to keep the flow going and the audience entranced. DJs know this too - there is nothing that disrupts the dance floor quite like a missed transition or interrupting the song at the wrong time. DJs, just like video editors, are most successful when they become invisible to the audience. Although they are crucial to the product, video editors and DJs don’t let themselves get in the way of others enjoying their work.

Editing video like a DJ will keep your viewers eyes on the screen and feeling engaged with what they’re watching.

To use the DJ analogy, fumbling the continuity in the mix causes the crowd to stutter step and lose their feeling of the music. They all of a sudden recognize that they are dancing and now have to try to pick it up again as before. For some moving on the floor, it becomes an excuse to stop dancing.

What this means is that good editors must use their intuition and take great care to observe minute details in the clips they are working with. Single frame or sub-frame edits can be the difference between an edit you pick up on and one you can’t. This is especially the case when editing audio. Below is an example of how match on action edit can apply to audio. I’ll be using Adobe Premiere Pro in my example, but the principles of editing like a DJ are software agnostic.

When working with a music underscore, editors will often have to create loops or change the music to fit the length of a scene or segment. In this case the editor is most literally working like a DJ – listening for the moments when the song changes and replacing the original beat with another.

Getting Down to Business

Take a look at the waveform of this example music track:

Just by looking at the waveform you can tell when the music changes. You can see the accented beats of the song as the spikes where the amplitude is greater (waveform is taller).

There is a pattern to the beats.

Also take note of how the shape of the waveform changes after 11 seconds, just after where the playhead sits.

Seeing (or hearing) patterns like this is the first step in creating a loop.

Step two is carefully splitting the clip at the beginning and end of the pattern. 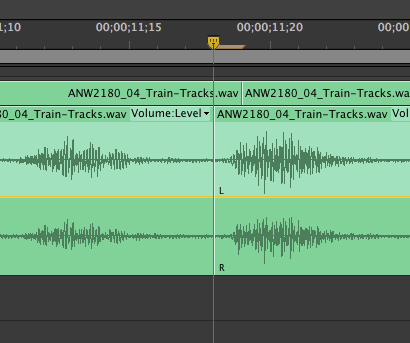 I’ve highlighted in orange the pattern we are going to loop.

Clear some space on the timeline just before or after where you spilt the clip.

Hold down the option or alt key as you click and drag the clip of the pattern into the open space. After you have it placed and closed any extra space you made, use the shortcut to preview the edit: Shift-K. Close your eyes and listen to your edit.

In this example, I have moved the clip I want to edit in to the track below because I’m hearing that the beat at the end of the clip and the start of the next one are a match. I don’t want to have them next to each other in the same way I wouldn’t want a match edit to show striking the match from one angle and then show it again after the cut. We are going for a seamless transition at a natural point in the song where the listener anticipates a beat.

Looking at the waveform (and by listening) I can tell that the beat is not matching perfectly even as I try to shift it one frame forward or backward.

I need to enable “Show Audio Time Units” which will give me the precise control needed to align the tracks exactly. Note: video will not play when Audio Time Units are enabled, so remember to disable them after the audio edit is made.

Once you have your edit sounding clean, you can repeat this process again using the same clip if you need to fill more time. However, it is better to let the song advance after one loop and look for other opportunities for looping later in the song. Using the same sample too many times in a row can sound monotonous and annoying.

Thanks for reading! In my next blog we’ll look at how to use match cuts to jump ahead in a song or to an entirely new song – just like a DJ.

TeamPeople is a media staffing company. We work with clients ranging from Fortune 500 corporations to government agencies to recruit, hire and manage creative and technical media production and AV talent. We combine extensive industry expertise with a passion for what we do to deliver best-in-class solutions for our diverse clients. 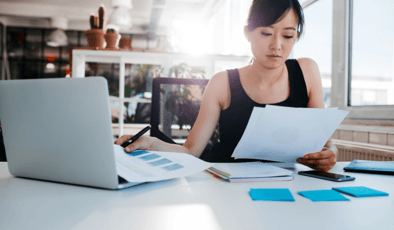 A Guide to Invoicing for Freelancers

Listen up Freelancers and Independent Contractors! You want to get paid? Well, the first step is to...

Loving What You Do

So many times, I hear from people that they do not like their job or dislike what they’re doing. I...